Robert Sanderson is available for speaking engagements throughout the Unites States. For more information or to schedule, please contact us. 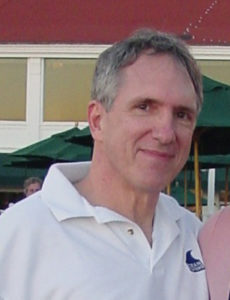 New Jersey Office of the Public Defender, Continuing Education Program
On May 11, 2017 Rob spoke to an enthusiastic packed house of attorneys and investigators on Understanding, Using and Interpreting Digital CCTV Video Evidence.
There are many types of video evidence now in regular use as evidence including CCTV, DashCAM, TaserCAM and BodyCAM and CellCAM. This seminar covered the analysis of motion in these types of digital video as well as the possibilities for misinterpretation, the effects of lenses, digital video recording devices and video frame structure. Proper collection of incident video and preparation of discovery requests were also discussed so as to obtain the highest and best version of the video.

Robert Sanderson
The “One Stop Shop” system is a myth. Take this tutorial on planning/budgeting a fully equipped, comprehensive video lab and coordinate staff training in manageable stages through a several year period. Focuses on adding specific capabilities over time which logically builds on personnel development.

Recently, Rob spoke to a packed house of elite defense lawyers in Washington DC about evidence collection strategies and the current capabilities of a/v forensic labs. The two hour session was created to inform attorneys as to how to collect the highest and best form of case related media from proscecutors, details on proper processing protocols, and featured enhancement examples with before and after clips.

MotionDSP ‘Ikena’ Video Forensic Software. Rob Sanderson, early adopter and contributer to the development of Ikena is first private forensic lab certified in its use. According to Rob, “This technology is the latest giant leap in video enhancement software. Truly something to be excited about and should be on the ‘must have’ list of any crime lab.”

AVFL is featured in the April 2005 issue of PROAV magazine. Also look for the article in Law Enforcement Technology magazine in the August 2008 edition. (Available on Officer.com) Rob Sanderson is featured in a primer on how police departments can deal with surveillance video enhancement in an effective, organized program involving forensic equipment and training.

TIP! Surveillance cameras can be used in most exterior residential locations; however, you should remember that a surveillance camera cannot be located where there is a reasonable expectation of privacy